If you frequent college classrooms either as a student, professor, or bum, you might have noticed a male student occupying two desks and chairs, for the sole luxury of the student putting his feet up or resting his backpack off the ground. 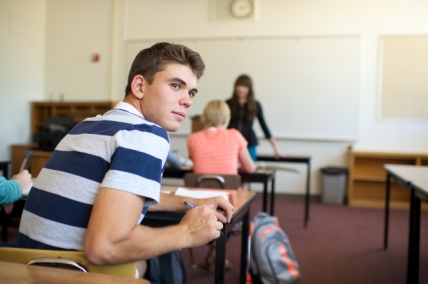 While some don’t have a problem with the extra desk usage or haven’t even noticed, others, like senior Melissa Gerald, see it as unfair. “I mean everyone can’t take up a second desk! It’s just common courtesy,” she said. Gerald also believes this behavior is indicative of political beliefs. “Like, duh people who do this voted for Trump. That man’s whole life is taking up extra desks.”

Despite this hesitation, Carpenter concedes. “But yeah, that behavior would indicate a general disregard for other humans, which is a key marker of Trump supporters.”

Tyler Hawkins, an active participant of occupying two desks, doesn’t see a problem with his actions. “I just wanna stretch and if there’s an extra desk available, I don’t see the problem.” When asked about his voting, Hawkins initially wanted to stay away from politics, but changed his mind when he heard the theory. “Who said that? Was it Melissa? Whatever, I can tell she voted for Bernie by her clogs,” Hawkins said