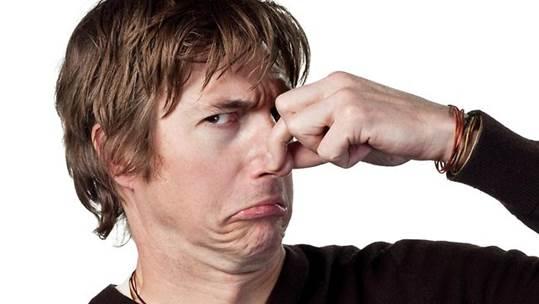 Area man James Fernandez was startled Wednesday evening by a strange smell coming from an unidentified location in his apartment. Fernandez, a student and part-time pizza delivery boy, searched unsuccessfully for the somewhat sweet and sharp but also ripe odor for approximately 55 minutes.
Fernandez returned to his video game and figured it wasn’t that bad, and that he would just get used to it. “Yeah, at first I figured it was probably from some crazy mix from the trash, so I took that out,” said Fernandez, “but it was still there, so then I assumed it was residual throw-up on my wall from that time I drank screwdrivers alone all night. I wiped it with some water and sprayed Febreeze, and it was fine but came back after like 5 minutes.” Fernandez reportedly spent the rest of the night hoping that the girl he was kind of having a thing with would either not notice the stinging, rotten, overwhelming smell, or be okay with going to her place even though her annoying dumbass roommate would be there listening and judging because she’s a lonely fuck.

Fernandez even sought help from a consultant, his friend/drug dealer, Griggs. Griggs described the odor as “definitely noticeable, man” and “holy shit, you need to get your life together. I sell drugs and I’m telling you this. Come on.” The two searched under the couch, in the fridge and through the laundry bin for the source of the tangy, raw, powerful, almost meaty smell to no avail. “I called my landlord to see if, like, this was a thing with other people you know,” Fernandez said “but all he had to say was that my rent was late again. Same old shit. He wasn’t much help.” The two then walked to the nearby Sunoco in order to get some more Febreeze, but all they had was car air fresheners so they figured that would probably work just as well and bought three new car smells. Fernandez then decided to give up for the night saying “I’ll find out exactly what it is tomorrow. It’s getting kind of dark and my lamp in broken, so I’ll look tomorrow when the light is better. It’s not too terrible. I’m pretty sure I’ve been to parties that would LOVE an air freshener made from this shit.”