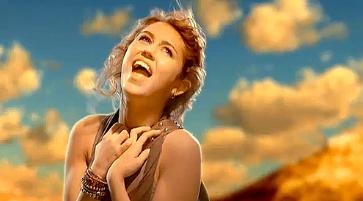 Seven years ago, as part of the soundtrack for the seminal classic “Hannah Montana: The Movie,” Miley Cyrus released one of the most uplifting tracks of the century: “The Climb.” Today, Cyrus’s anthem of hope and perseverance is still helping people work through trying times in their lives. In celebration of the “The Climb’s” seven year anniversary, we reached out into the community and got some people to share their testimonials on how “The Climb” has changed their lives.

Peter Prentice, a Junior at Pittsburgh University, told us that one night he had “taken about two cases of Keystone Light to the head” and only by the grace of Miley and her words did he make it home safe, sound, and without “barf blasting out of me like bullets out of a Beretta.”

Darcy Fields, an Oakland construction site supervisor, revealed that she was  jumped one evening after heading home late from the site where she works. “Yeah, oh my gosh it was like the scariest thing! But something told me to just start singing “The Climb” to my assailant. By the time I got to the chorus, he had stopped absolutely going to town on my face! I suffered several cracked ribs that night, but I only ruptured like one of my kidneys! I credit that all to Miley.”

Hattie McDaniel, an employee at a local Foot Locker and single mother of three, sent us maybe the most powerful anecdote of the bunch. “A year ago, our family house burned to the ground.” she told us. “We’re still unsure how the fire started, but I was in the basement watching a movie with my kids when all of a sudden we smelled smoke. Then we saw the flames. I took my babies’ hands and began to hurry them towards the stairs. I just kept telling them ‘keep moving, keep climbing, keep the faith, keep the faith’. I knew Miley would guide us to safety.” Unfortunately, one of Hattie’s children did not “keep moving” or “keep climbing” and was lost in the blaze. When we offered Hattie our condolences after hearing this news, she took a beat and then replied, “It’s always gonna be an uphill battle…somebody’s gonna have to lose….”